A few weeks ago, I found a runner at TJ Maxx that I loved for my kitchen. I grabbed two because I debated if I only wanted it in my kitchen or if I should put one by the stairs.

I really, really liked it. My mom was with me so of course, I had to get her opinion and further justification it would work.

I took them home and loved it because it perfectly matched my mint colored dishes from IKEA. I realized, though, that I didn’t need two.

A week later, Brandy and I went back to TJ Maxx so I could return the one I didn’t need and I found a rug that would. in fact, work beside my stairs. But when I was checking out, I saw yoga mats and my wheels started spinning as Brandy was checking out.

That seed immediately grew roots because I could not get it off my mind. This was my thought process: I could paint that. I could buy the color I needed and paint a pattern or better yet, stripes and it would be easy to wipe off and if it got wet, no big deal because again, it could be wiped off!

Slowly, though, I remembered I didn’t want to buy a yoga mat to waste just to see if it would work……until one day last week, I found my Wii Fit mat!

I could.not.wait. I just knew it would work.

As soon as the boys were in bed, I measured the mat (and moved the previously bought rug to a hallway). The yoga mat was 72” so I knew I could somewhat evenly do eight inch stripes.

I taped off stripes to paint white first which was easy. Except I remembered that I saw someone’s post about painting stripes on an outdoor rug that said, do inside/outside with tape. Sooo, I had to go back and fix the tape.

(Forgive the phone photos, I kind of forgot to take pictures as I was going because I was so anxious to get it done!)

This is me trying out the navy over the original purple of the mat. Don’t worry, Dad, I put newspaper under all the entire mat and its edges as I painted.

After that, it really was simple! I just painted two coats of white (allowing it to dry in between for a couple of hours), then the next night, re-taped it over the white edge and did the same thing with navy!

I’ve come to love navy this year and I’m kind of sneaking it in all the rooms in the house.

Then, I saw this room from SAS Interiors, and I felt much better about my navy choice! Isn’t that gorgeous! I still have a loonnngg way to go!

What do you think? An easy update for free because I had the mat, I had tape, and I had white and navy paint! 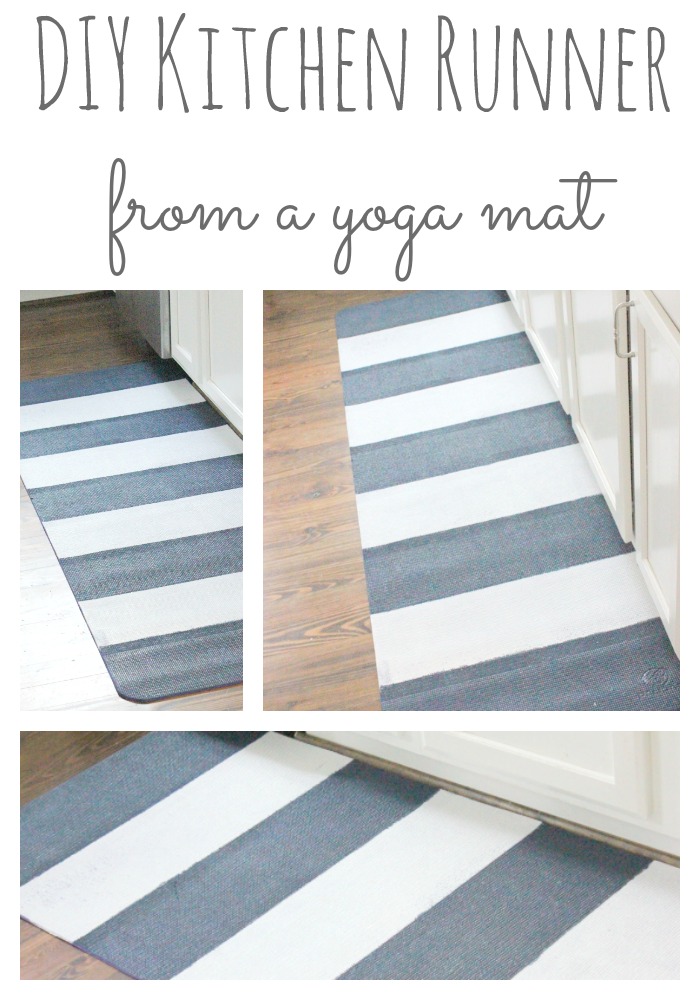 (Some important things to note: I had a sample of navy paint from another project I still haven’t shown you but I barely used any so this project doesn’t really require a lot of paint. Also, I’m thinking it would be easier to do if you found the yoga mat in a color of one of the stripes you wanted. Finally, I alternated a brush with a roller to get in between all of the little bumps of the yoga mat.)

Please let me know if you try it! I would love to see what you did!

Linking up here!
DIY Showoff | Home Stories A to Z | I Should Be Mopping the Floor | Cozy Little House | Oh My! Creative  | Tatertots and Jello