The question I’ve had the most since showing you our dream kitchen is, “How in the world did you do it?”

I have been so overwhelmed by your kind, kind words and encouragement!! Thank you so, so much. I love reading your comments and getting to know you!

However, I also experienced my first negative comments (even though it was only two, it still stung a little). There were also a lot of questions which made me question myself for how we truly did it. So, today, I’m trying to abate that discussion by sharing EXACTLY how we made it work when we literally had nothing in this kitchen but floors, a door, and windows! (I even had Lowe’s send me a spreadsheet to be sure I had the prices correct! We only came in a tiny bit over $5,000! Whew!) 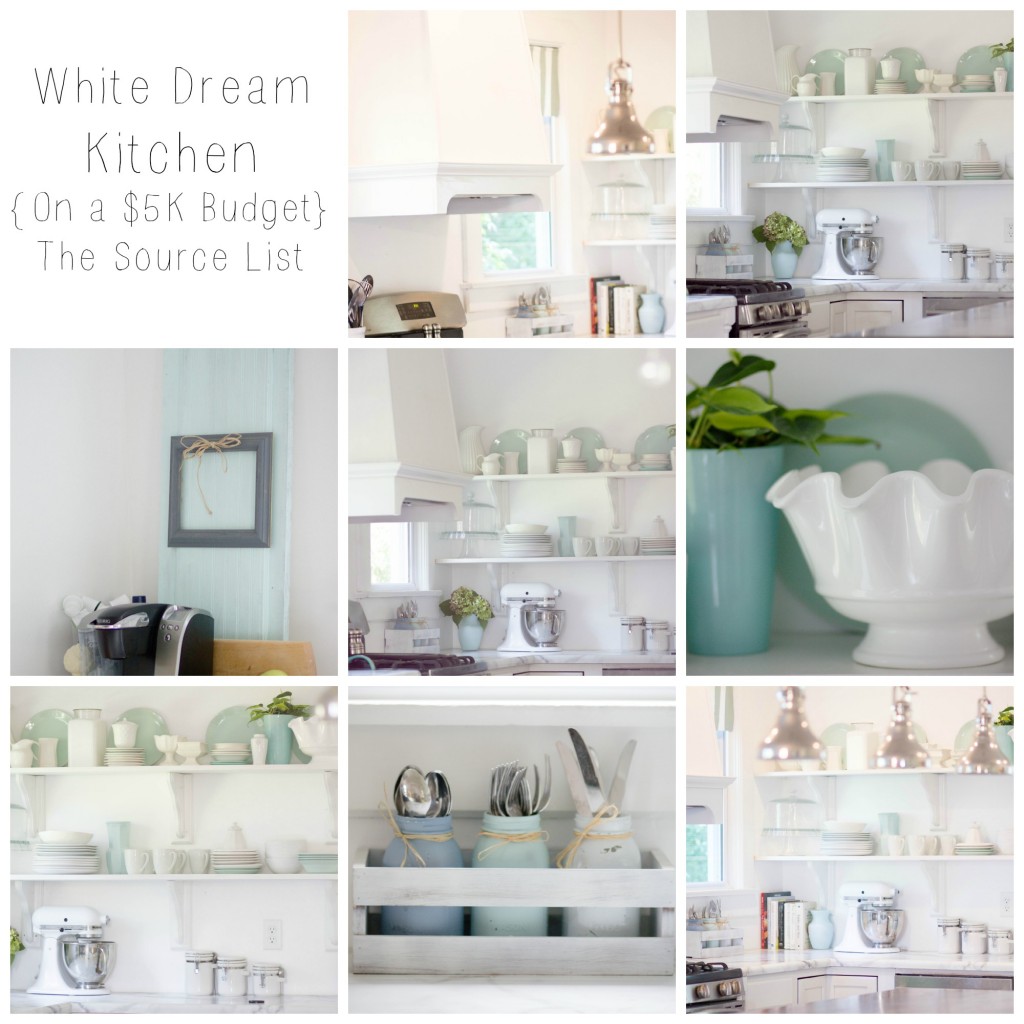 With a LOT of sweat, TEARS, and lonnnnnngggg days and hours…we made it happen. Seriously, we got the  most inexpensive parts of this kitchen we could.

For example, we got STOCK UNFINISHED cabinets from Lowe’s and our gracious contractor helped us spray them. It took three coats of white paint (and notice walls and everything are white to try to cut costs) and a final coat to seal them but it saved us a ton of money.  You may remember that we got a quote for custom and were heartbroken when we ran out of money, but in the long run, I’m so glad I won’t be paying for this kitchen for 30 years! 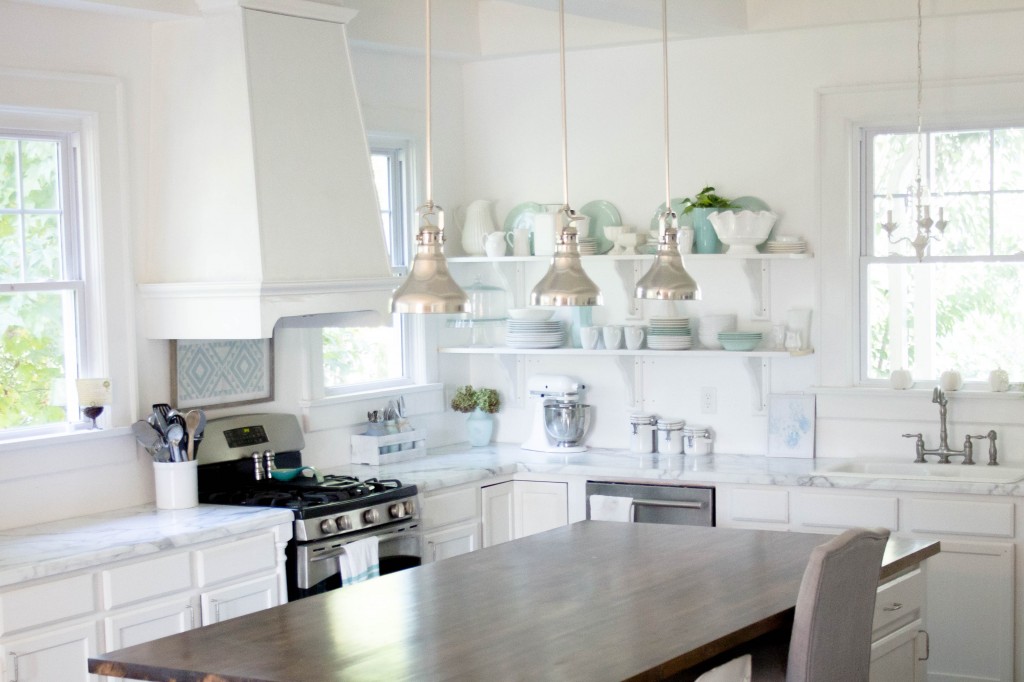 We got our appliances on CLEARANCE. When we were searching (and we looked everywhere from a scratch and dent store to appliance centers), we truly found the best deals at Lowe’s. The guy showed us each appliance that was on clearance and one that had even JUST been marked down because of a tiny scratch somewhere (our oven came in around half price because of that!). 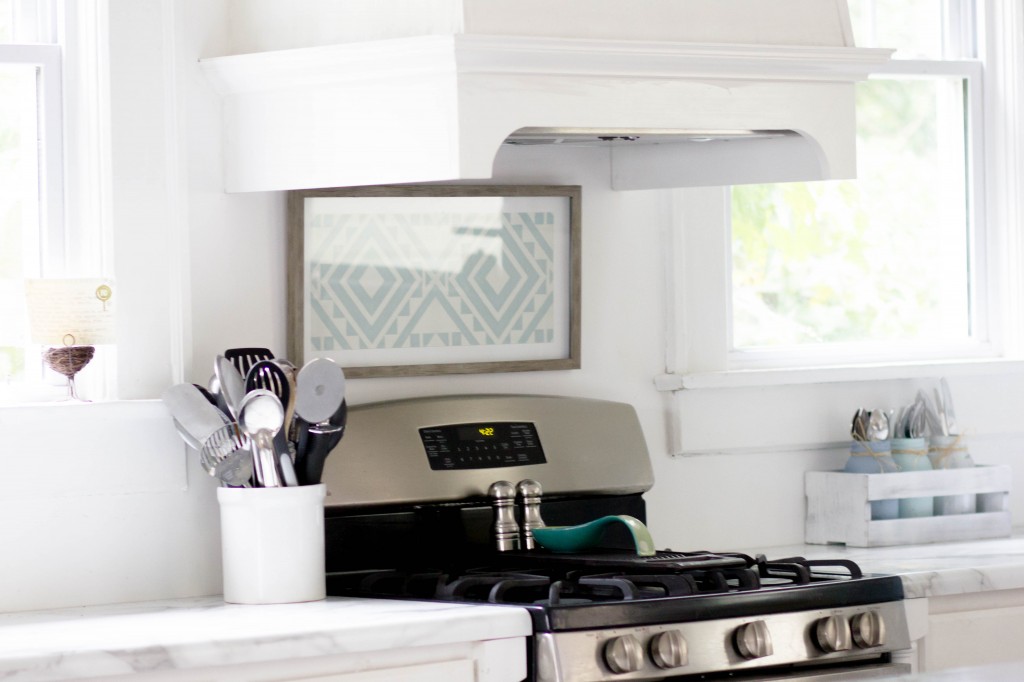 We literally bought the cheapest countertops money could buy: Standard A Formica Calcutta Marble Laminate. (And we LOVE it. It can’t be messed up…even when I forget I turned the hot glue gun on and it drips on it…)

Cost $613.59 (countertop-Lowe’s installed which could easily be avoided because our contractor helped so much, as did my husband!) 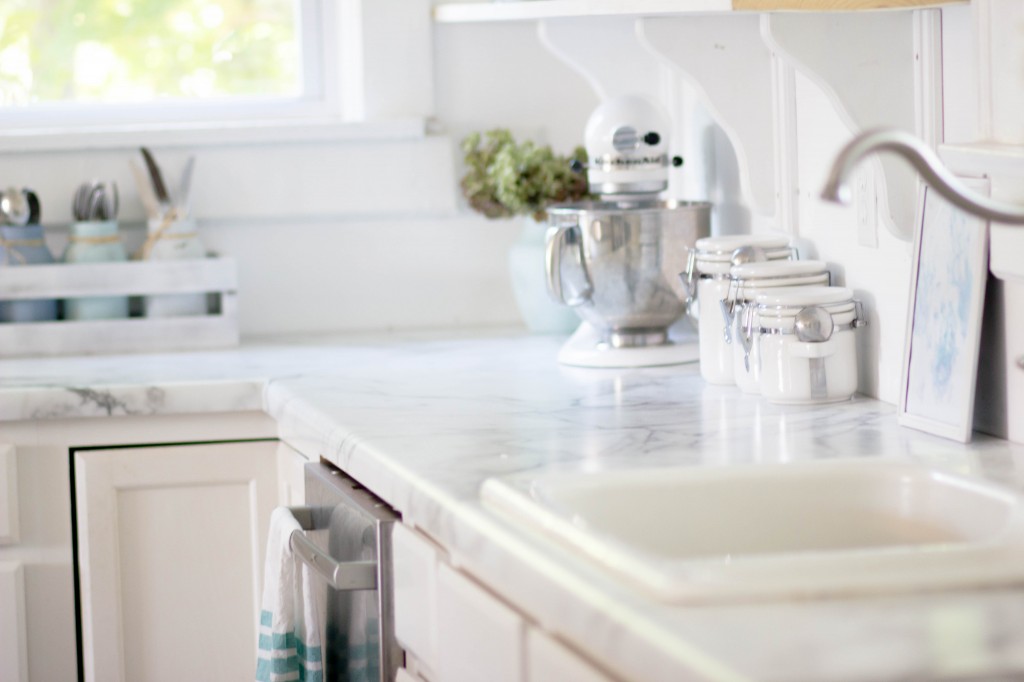 Even though I drooled over huge pendants for months, I couldn’t justify $150 each when these (this link is brushed metal but ours are brushed nickel) were $49 EACH. The white chandelier was also on sale for around $40! 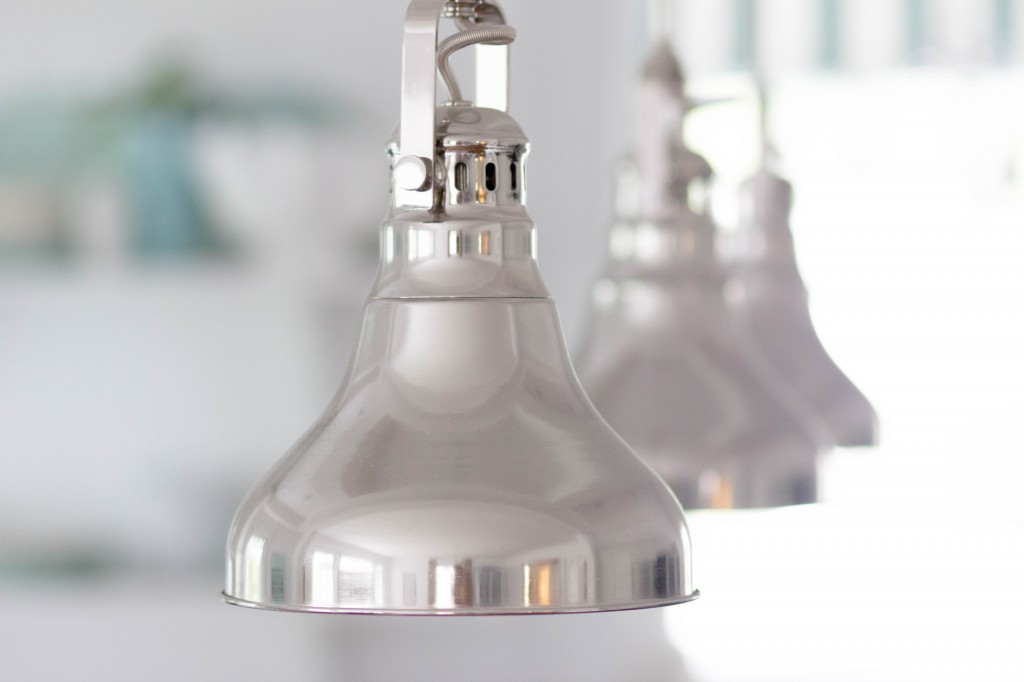 We researched our island a ton, too, and bought two pieces of butcher block from Lumber Liquidators and my dad (and Russ) planed it and stained it for us. 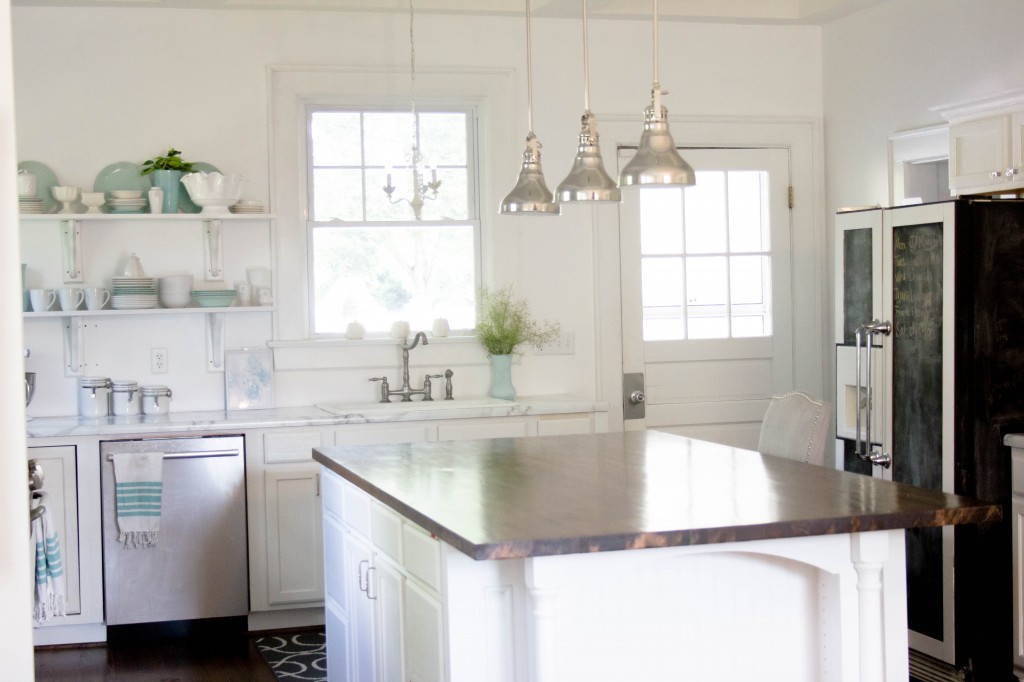 You may remember that the hood was my Christmas present last year!

The sink was $25 on Craigslist and we found the faucet on Amazon for $130!

The refrigerator was FREE and we picked up some magnetic primer (around $30) and used chalkboard paint (already had) and panels (a couple of dollars each) to make it look built in. We also already had the towel bars (that were supposed to be for our bathroom!).

Finally, for the open shelves, we used 2 1x4s and brackets for $7.47 each and leftover white paint! 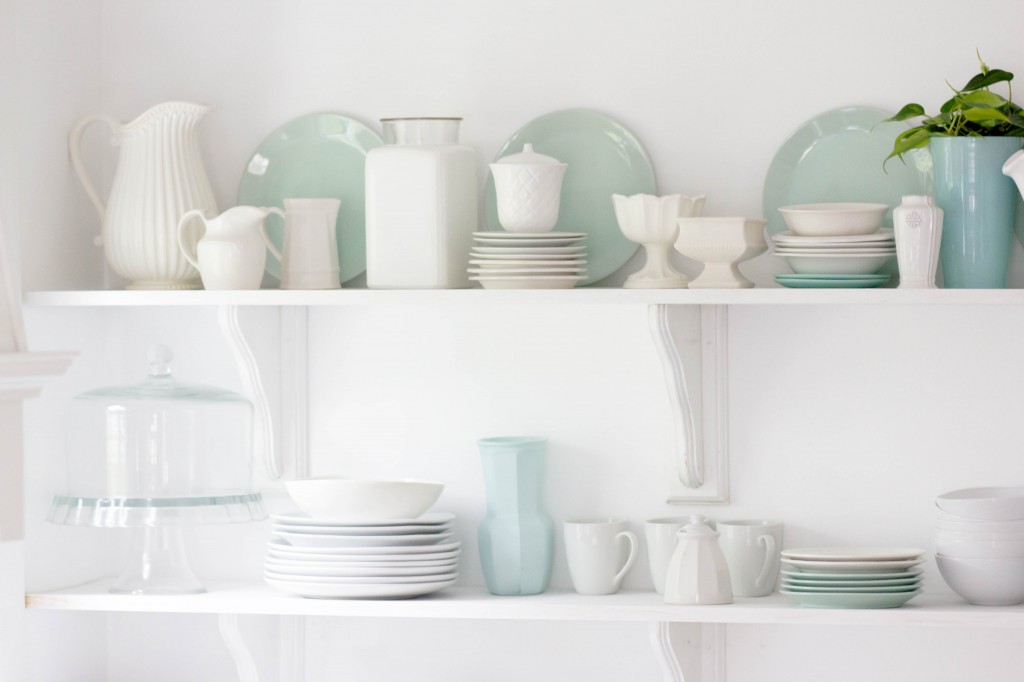 So a little bit over $5,000 but still on a $5K budget. Remember, we purchased it all at Lowe’s and because we used our Lowe’s credit card, we also got 5% off the total so that helped some.

I truly hope that helps and that even though we were little bit over $5,000, it helps you see that it can be done a reallllyyy tight budget. We truly used what we had or picked items up at thrift stores throughout the year to style it and bring the colors together. Remember, we just finished our second open shelf and I spent around $12 to finish off the look with dishes from our local THRIFT stores!

To have started with nothing because we weren’t able to salvage any of the cabinets left behind (and compared to a custom kitchen with an estimate of only cabinets and countertops that was $13,000), I feel pretty confident that $5,347.59 was a great deal!

What do you think? 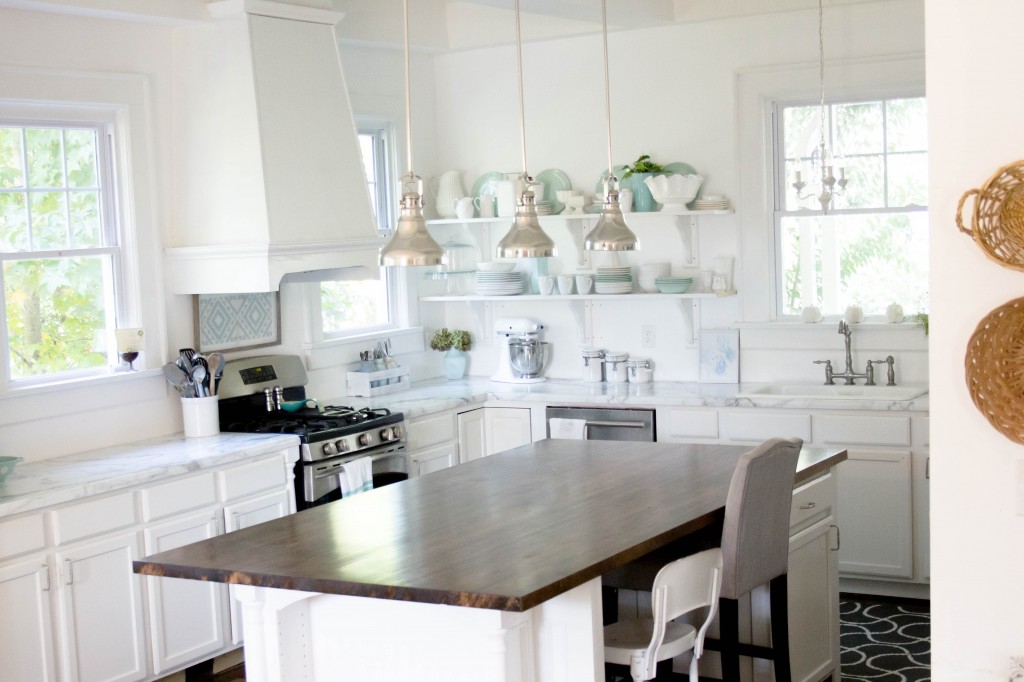 You can catch up on the entire kitchen story here:  Part I,  Part II, Part III, Part IV, and The Reveal or pin it for later! 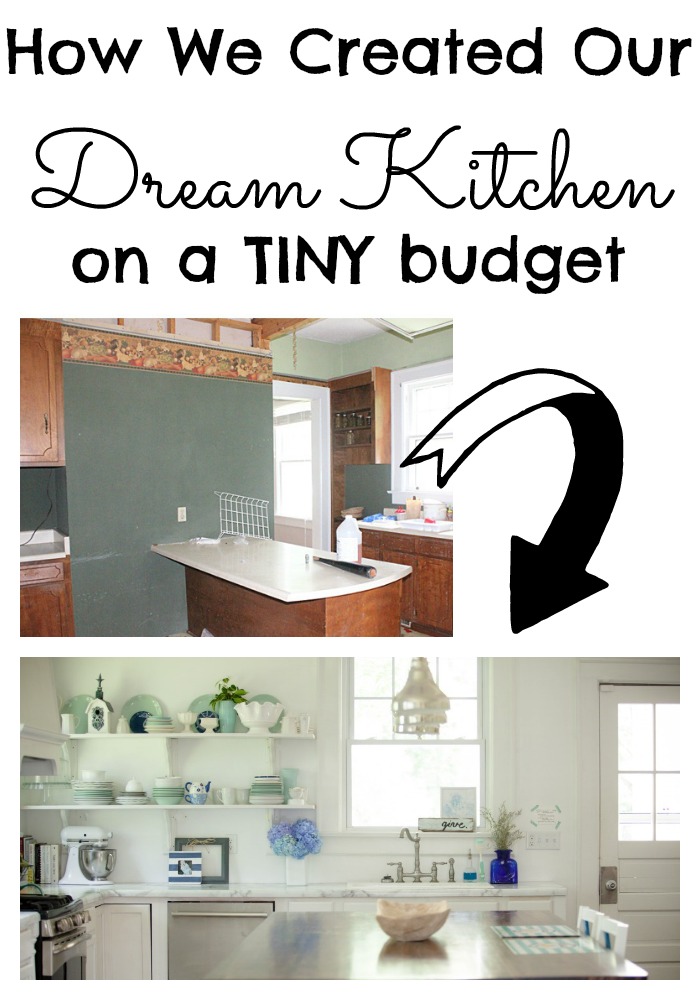