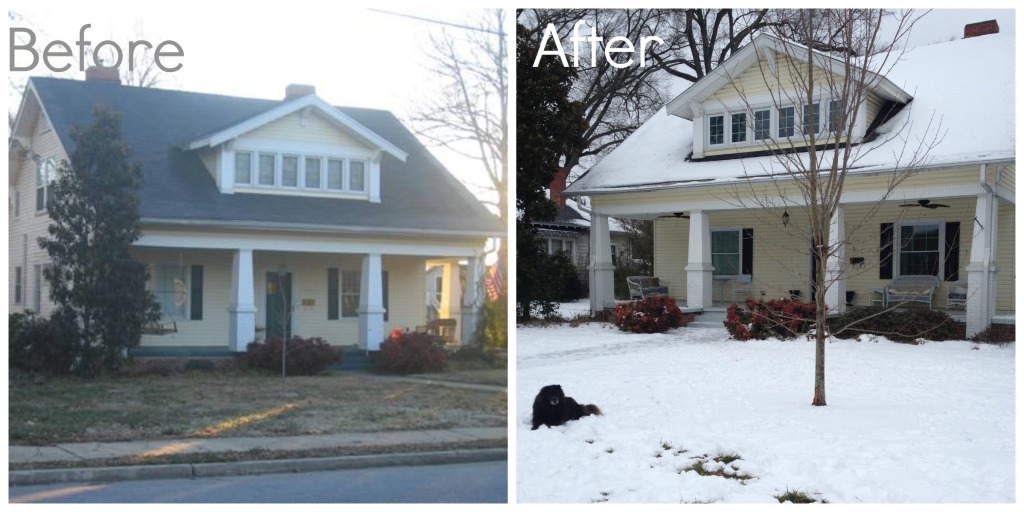 Part I. The Two Year Wait
Almost three years ago, my husband and I were walking around our small hometown.

I noticed this beautiful, old house lonely as it sat on the street.

We kind of walked slowly by not sure what was going on with it. For some reason, I could not get the house off my mind after that day. Daily, I continued to think about this house. My curiosity had been peaked and I needed to know more about this house! One day, I was able to go in the house…and it was just as beautiful on the inside but needed SO much work. Days went by and I still thought about this house…it was empty, so how could it be mine? It certainly didn’t have a for sale sign in the yard! Plus, we already owned a home, we didn’t need another one. I STILL couldn’t get it off my mind so I started researching…I searched property records, asked the neighbors and finally, I called the bank that carried the mortgage for this house. Unfortunately (after being transferred about twenty-five times), all I found out is that it was not yet in foreclosure so there was no way to buy it. In South Carolina, it takes two years for a house to go into the foreclosure process. All of this was information they couldn’t technically give me anyway. They pretty much acted like I was crazy.

In the meantime, my husband and I found a great deal on a house that was coming out of foreclosure because someone bought it and did minimal work. To us, buying a bigger home than the 2/1 we currently lived in, for the same price, was an easy decision! So yes, at this point, we were the owners of two homes. A small but hopefully promising stepping stone on our path to the yellow house. 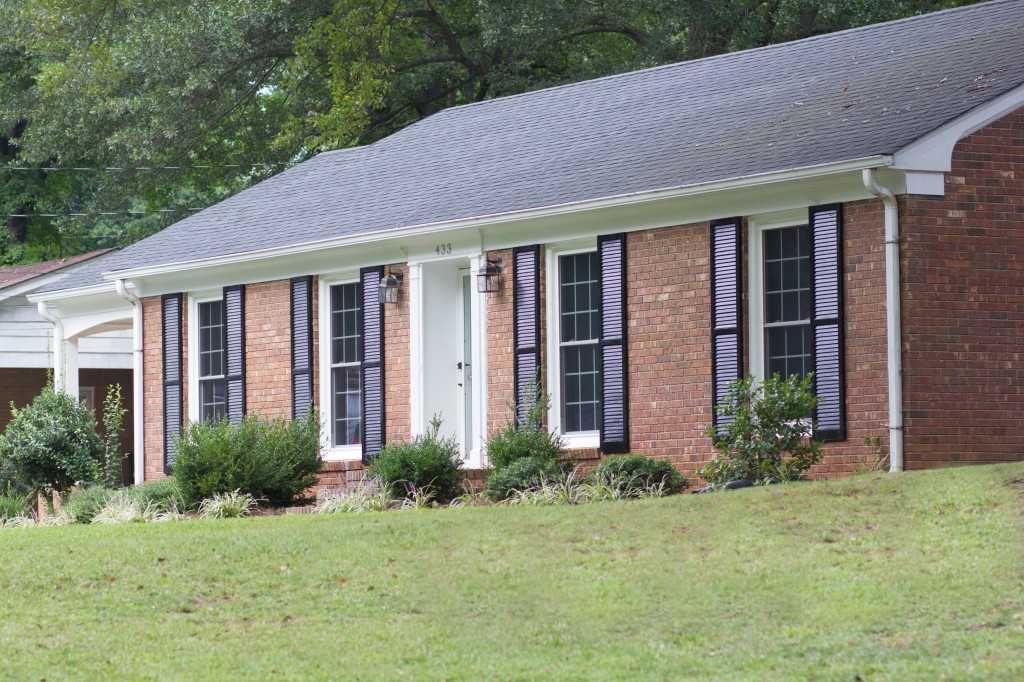 Part II. The Investigative Process
In the summer of 2012 (two years after this short walk by the yellow house!), I continued to have these strong feelings of a push to the yellow house. Knowing this nagging wasn’t going away, I started investigating even further than the online property records.

I went to the courthouse.

I called the bank.

I called the homeowner.

I talked to the neighbors.

I talked to the homeowners’ friends.

I called the lawyer in which the case was under.

All of which led me to dead ends.

Then, a breakthrough…the house was going to auction….in OCTOBER (remember, it’s summertime)!

Again, we had to wait. But wait, how could we afford this? This would mean we would own THREE homes, are we crazy!?!? Fortunately, God works in some crazy ways. My brother bought our first home in September so we were down to one house. Why did we need another? We’re both teachers. We don’t enjoy having two house payments! Why did I seem so set on this house? Because I absolutely loved it. I imagined raising a family there. I imagined dinners there. I imagined small groups, Christmases, and summers there.

But, how could we get it? 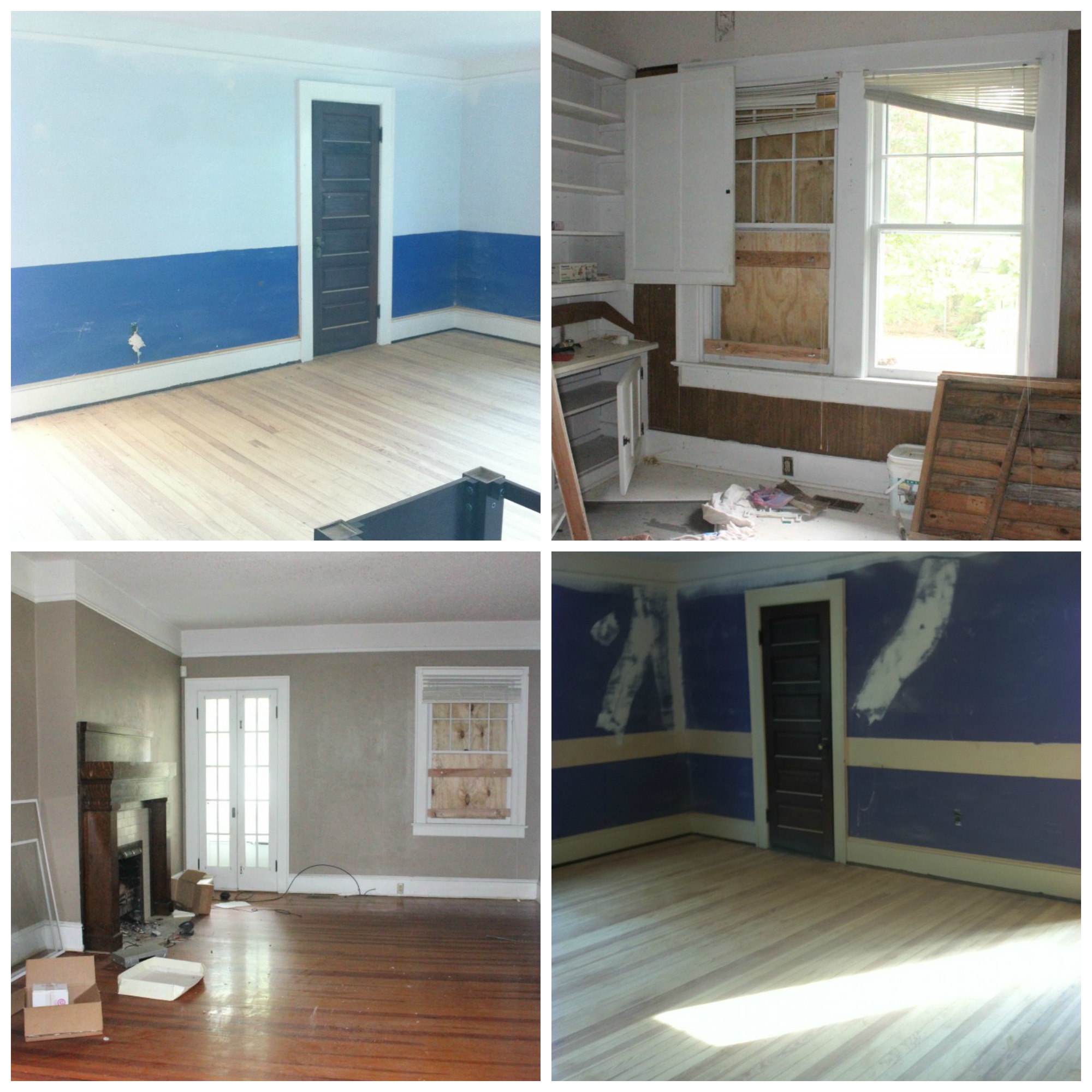 Turns out, all I needed to do was call the lawyer to find out the price it would be sold for at the auction (it’s a confusing process), something called the top bid amount. I had no idea what the top bid amount would be so I waited until 9:00 the morning of the auction and immediately called the lawyer to tell my dad whether or not to go to the auction (since I’m a teacher, I can’t exactly leave school whenever I want!). Unfortunately, the number was way higher than anyone anticipated and the bank bought it. Lucky for us, they were going to the put it on the market…this was the best scenario for us.

Even better, I contacted the bank after the auction, day after day, until they told me they would not have any information for a month (yes, a MONTH later it was still going through the process). FINALLY, I was put in touch with the realtor that had the house! She told me she would let me know the price when it came out, and sure enough, the day she put it on the market, she let me know. We immediately put in an offer. However, we STILL had to wait. Apparently, because it was such a low price, in such a great neighborhood, the bank put a hold on it because they knew there would be multiple offers. We offered above asking prices, prayed for five days, and we got the house!

And now you’re probably thinking, and why in the world would we want it?

Part IV. Bidding Wars – Finding a Contractor
I wish I could say from that point it was easy. Unfortunately, it just got harder. But after two and a half years, I was determined. We had to get a renovation loan in order to do all of the work to even make the home livable. We got a recommendation for a contractor from Russ’ uncle who was a builder. We met with the contractor he told us about and thought we were finished just like that.

Until six weeks later…and he backed out. Really.

We met with another contractor. He told us it was too much work.

At this point, the bank was now getting upset and says we didn’t have much time left.

Then we met a father/son team and turns out, they were up to the challenge. Seriously, it was going to be a BIG challenge.

At last the home was closed upon, and we started what we like to call, “Phase One.” (“Phase Two” would begin when we sold our home.)

Phase One would consist of fixing the guest bath that would also be our master…(Can you see the potential?)

and getting new windows…(We weren’t exactly in love with the boarded up windows!)… 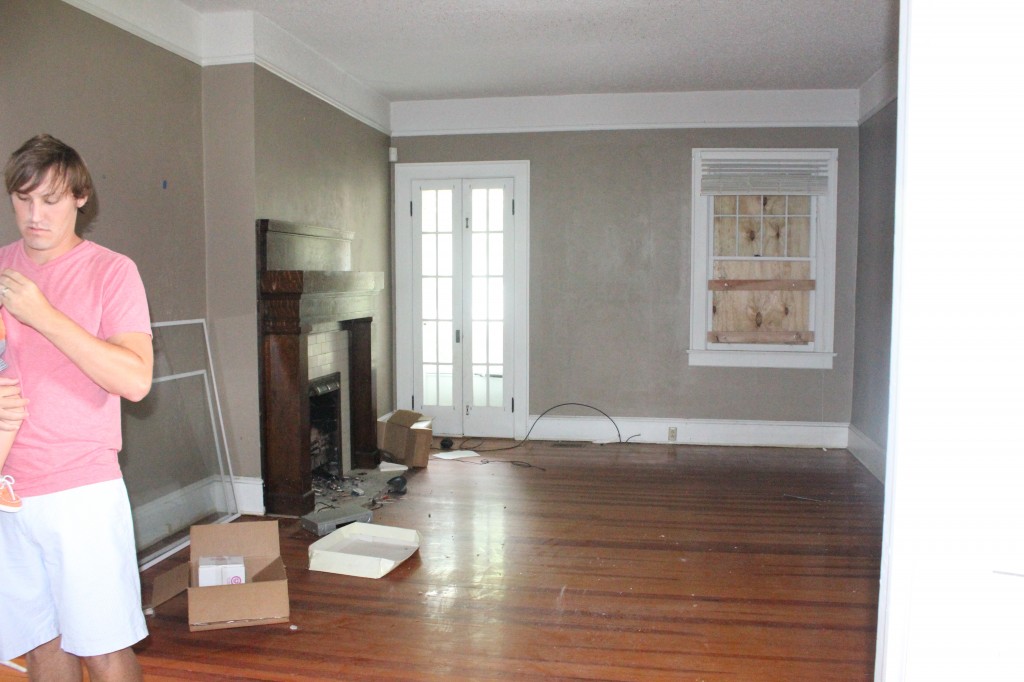 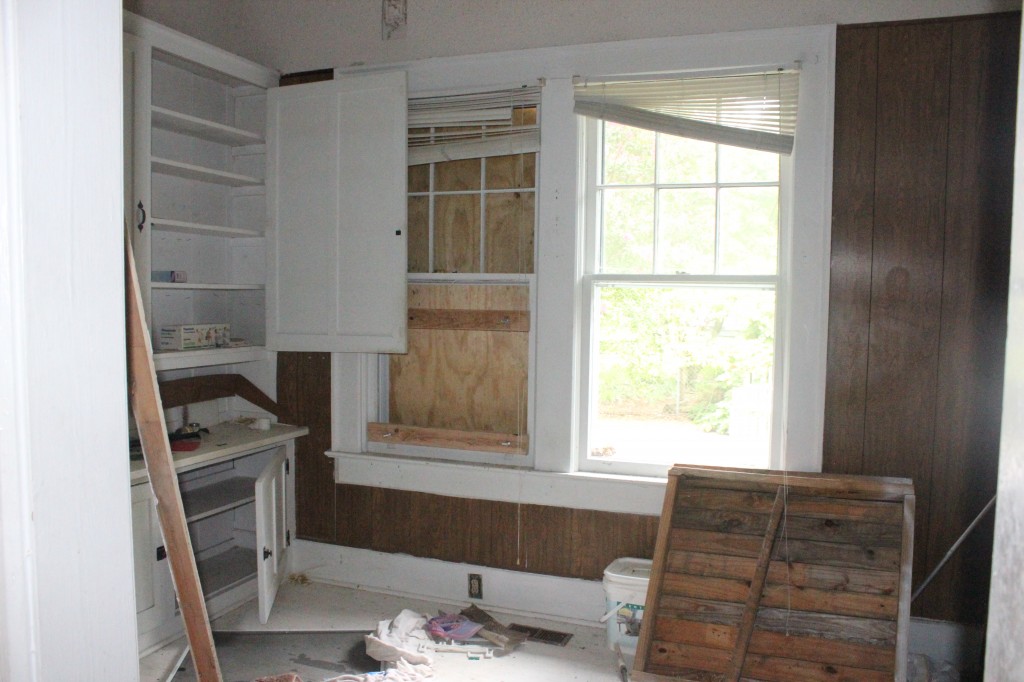 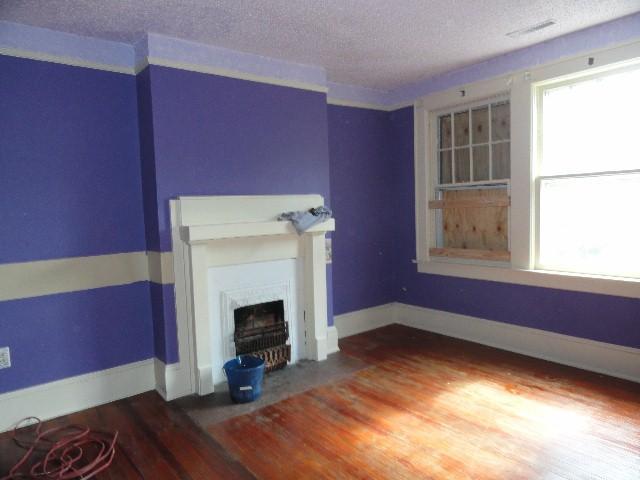 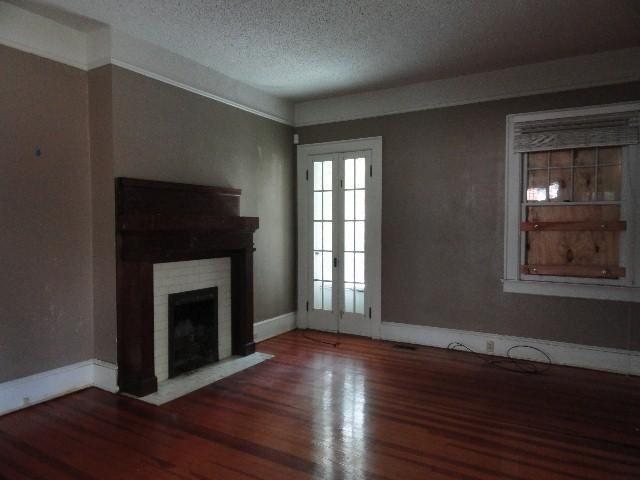 and fixing the roof…(You can’t see the blue tarp but it’s on the overhang over where my husband is locking the door!)!

Until, the contractor realized, it would be great (and MUCH cheaper than to go back down the road and do it) to go ahead and do a master bathroom. See all that space where Russ is locking the door? That wall behind it is the original bathroom and the contractor said we could add on pretty easily right now since we already had to redo the plumbing for the guest bathroom. So, we did. This, of course, had to be adjusted in the budget.

But we are so glad we made that change!

(You can read more about the deck and the pallet sofas here.) 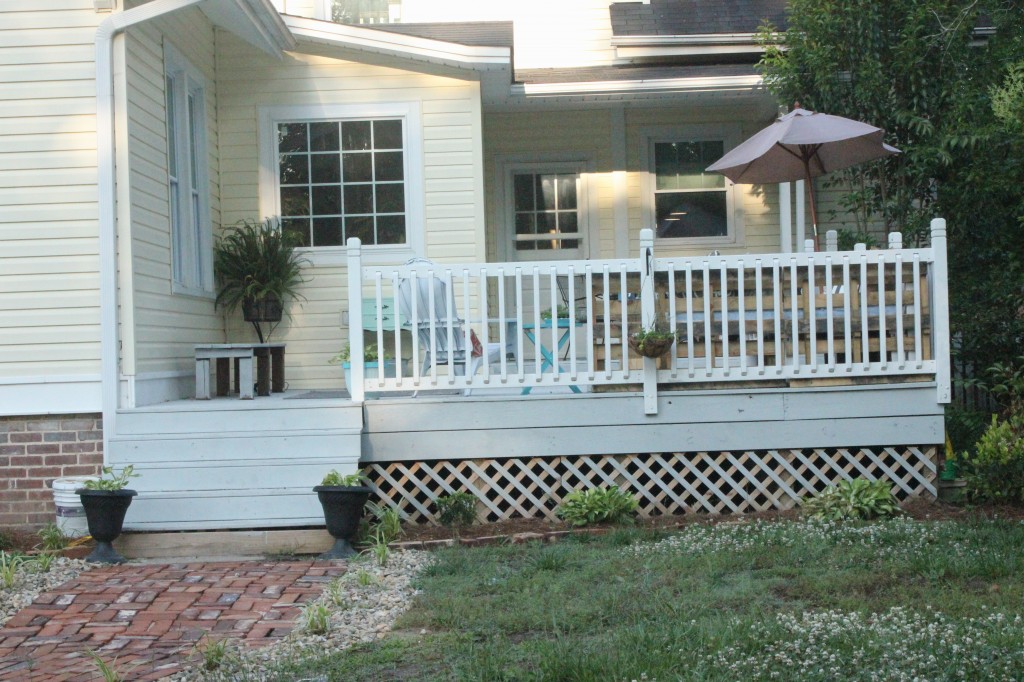 Part VI. The Budget
We didn’t have very much of a budget. Remember, at this point, we own two homes? Fortunately, other miracles occurred (like lots of help!) and we were able to finish Phase One. Unfortunately, we were kind of at an impasse. We needed to finish Phase One but also do some things for Phase Two because we were literally stuck with hardwood floors in half of one room. Remember the picture from the master? 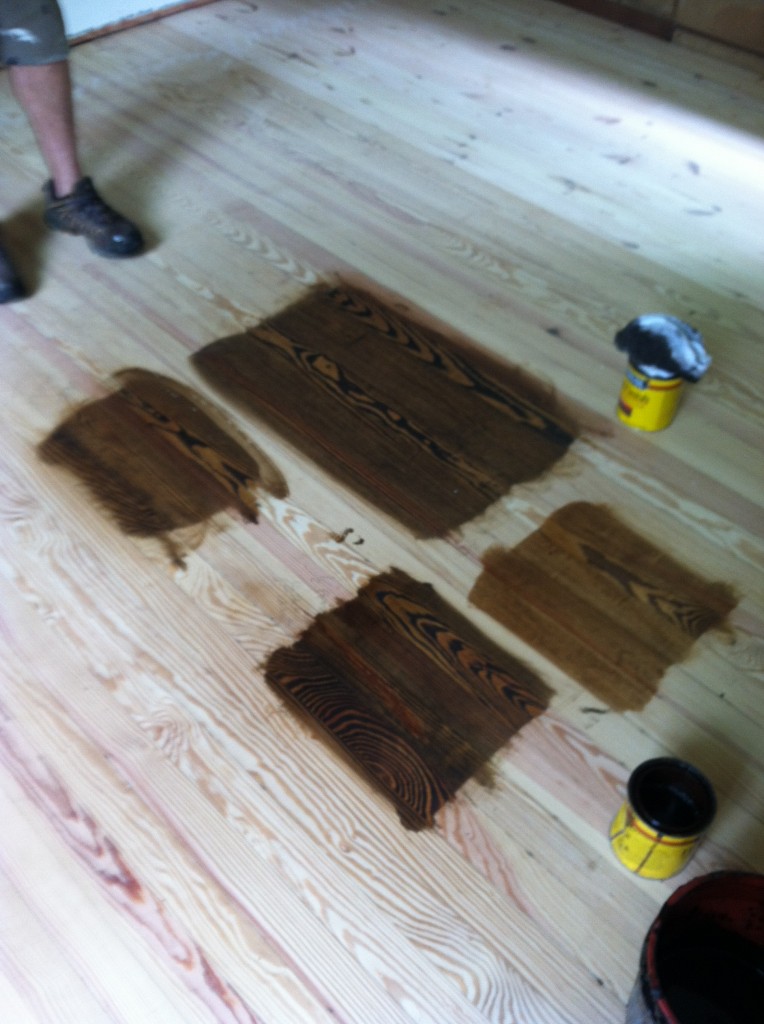 Those two bookcases came out and revealed no floor. Needless to say, we had to have flooring! Remember how I said, miracles had happened already? More kept coming our way and we were able to gut the bottom floor and upstairs bathroom and “finish” Phase One….which brings us to….

Part VII. The Renovation Process (aka the most stressful thing I have ever done!)

If you’ve never been through this process (renovations), it’s a wee bit stressful. Then, you start to question yourself, the choices you made, and the money you continue to bleed.

But once, the walls are up and painted, it all starts to come back and you remember the vision you had in the first place.

Maybe not you, but I sure feel like that!

But we had a vision: 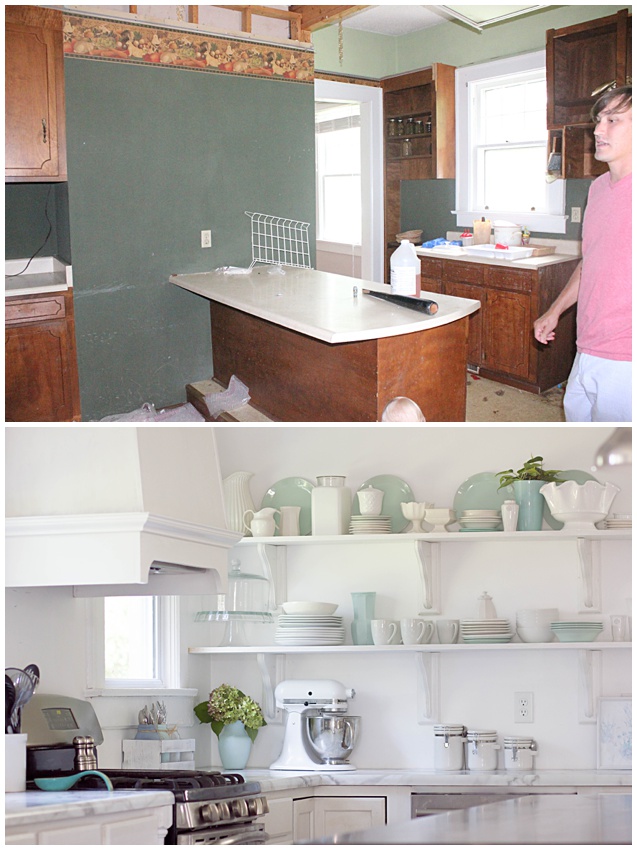 And PROGRESS!!! We literally tore down every.single.wall.downstairs! It was all plaster so it was now or never to convert to sheetrock.

(You can read about our thrifted dining room here.) 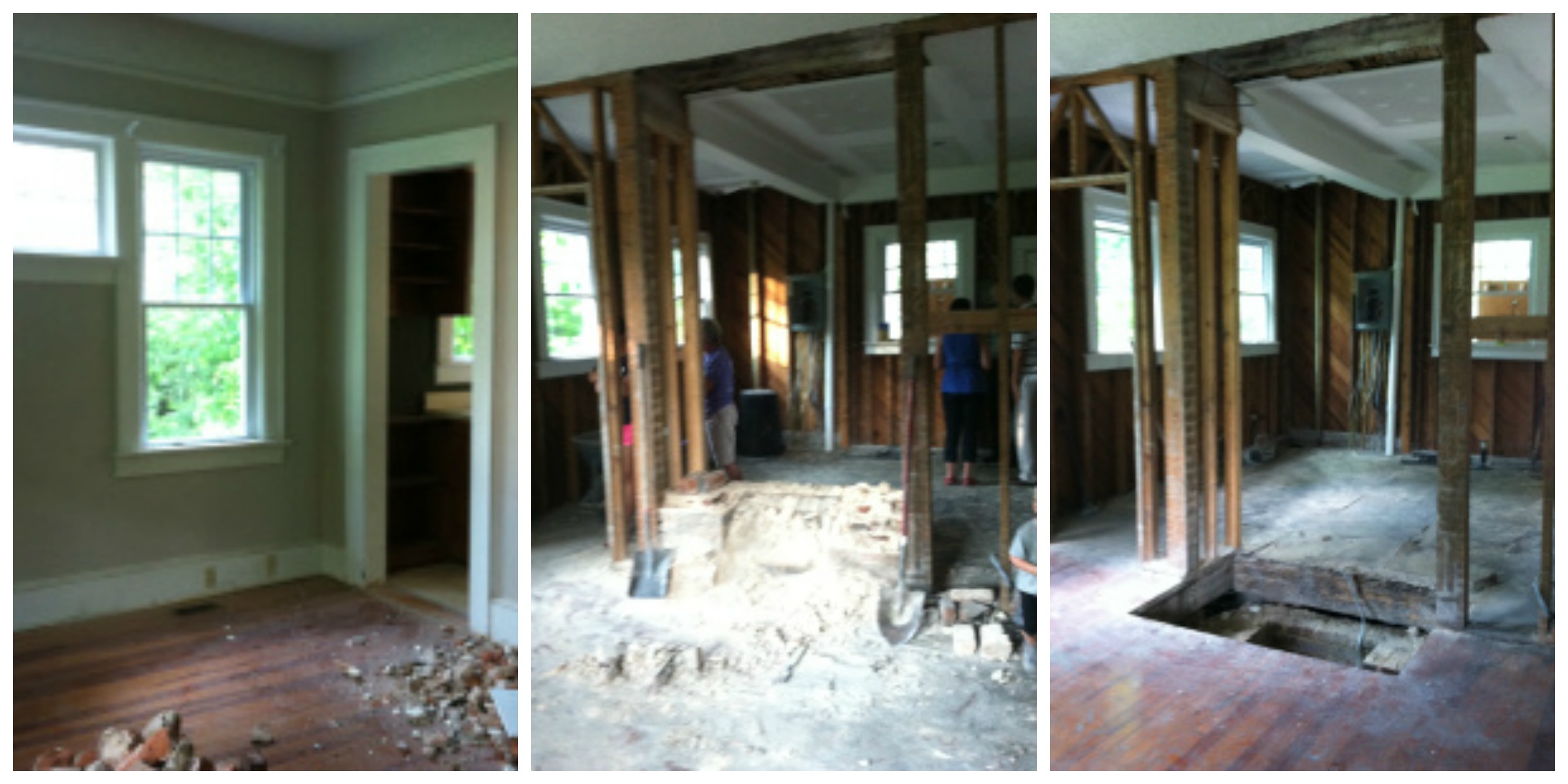 Can you see where the chimney was???? 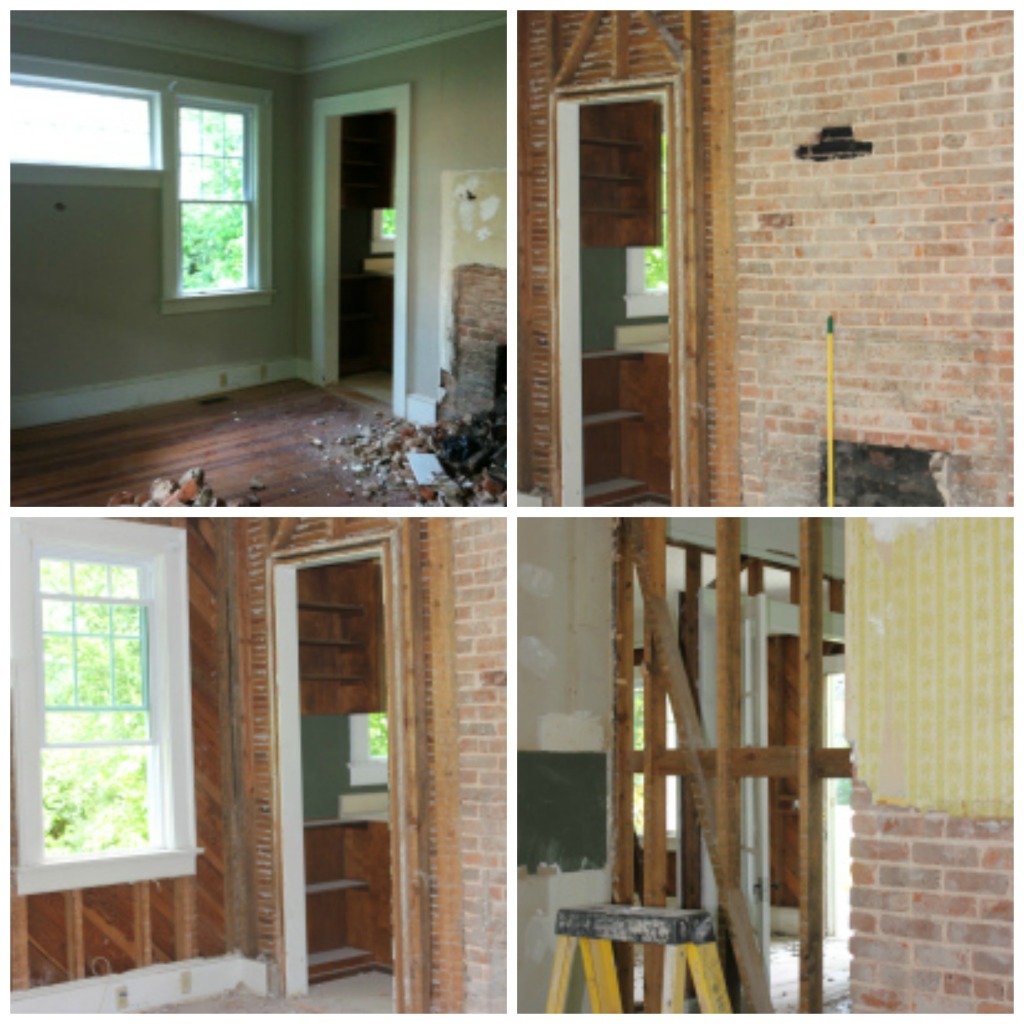 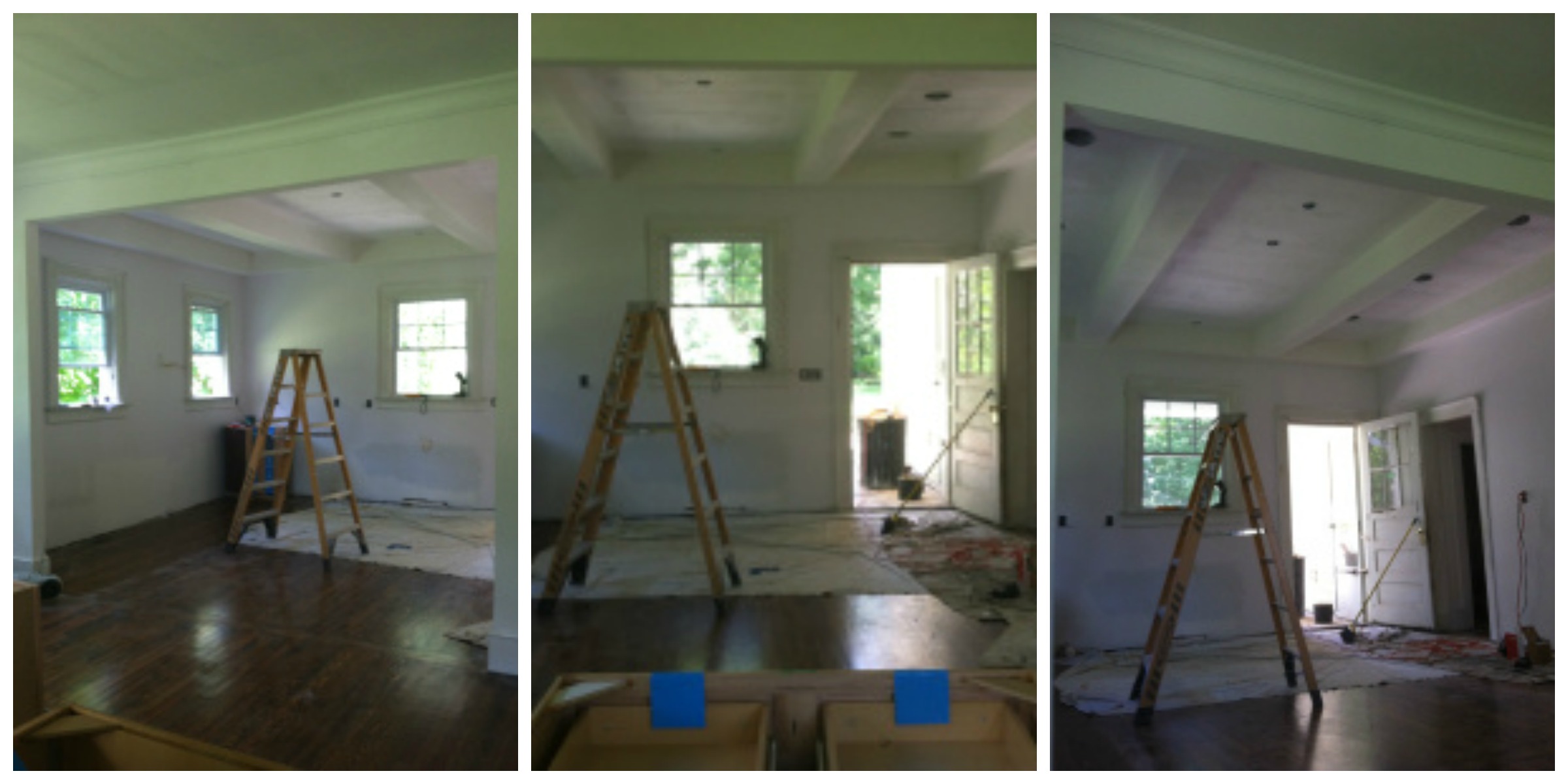 This was literally the most trying time of my life. It was so hard to visit each day but I knew, I KNEW, we could celebrate Christmases here and kids would gather around this island. 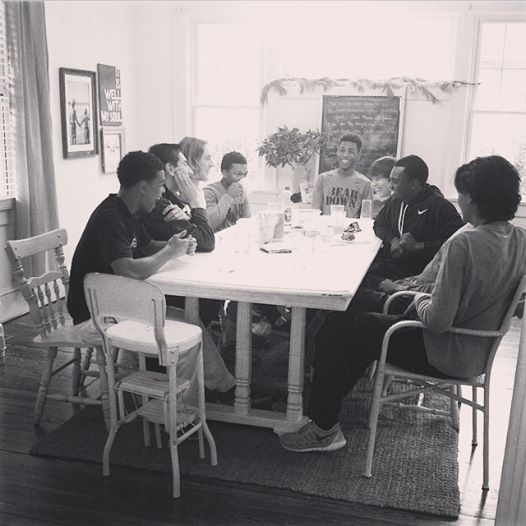 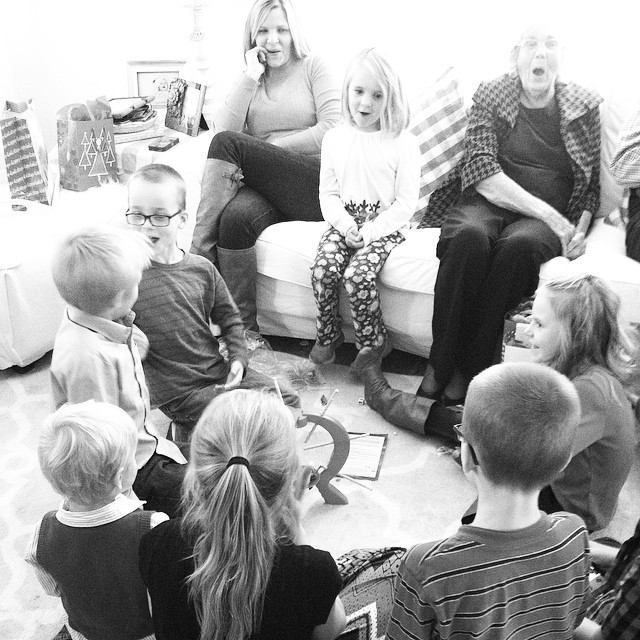 That vision alone pushed me through. And now…. 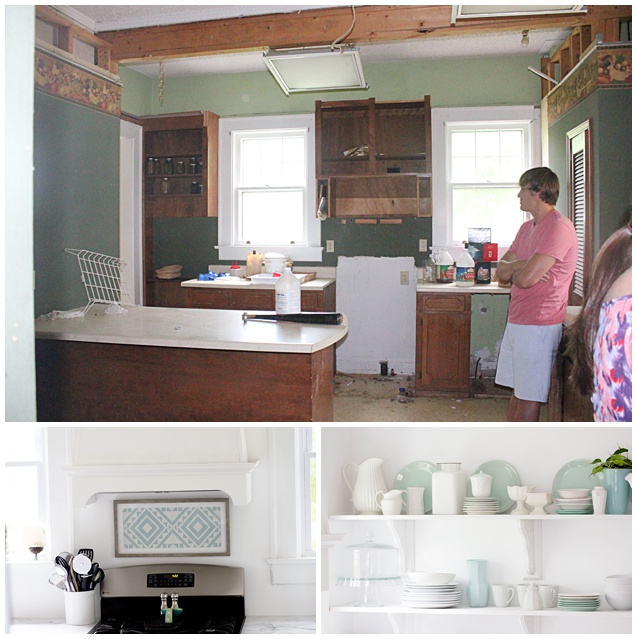 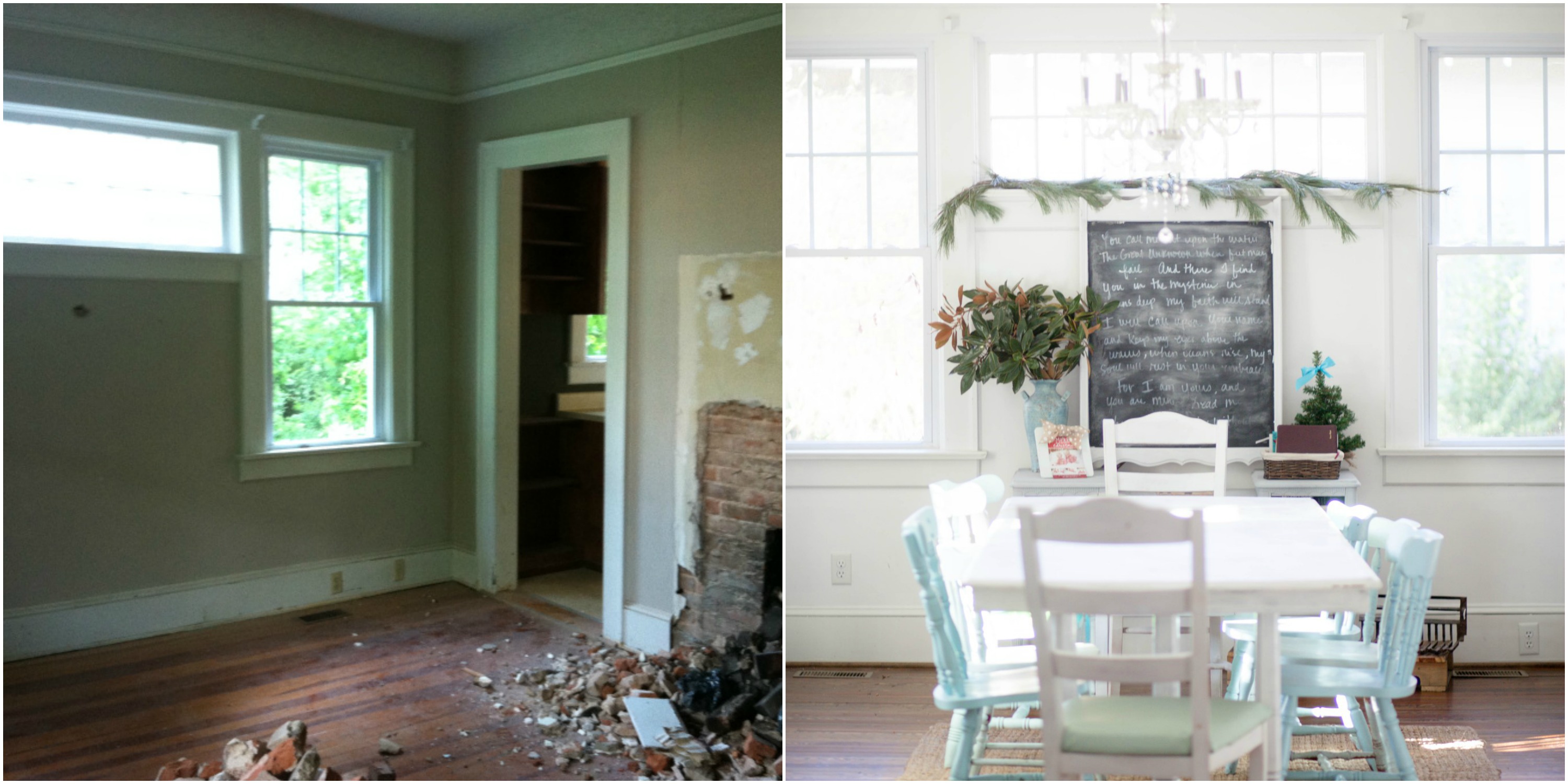 It is truly a dream come true…. 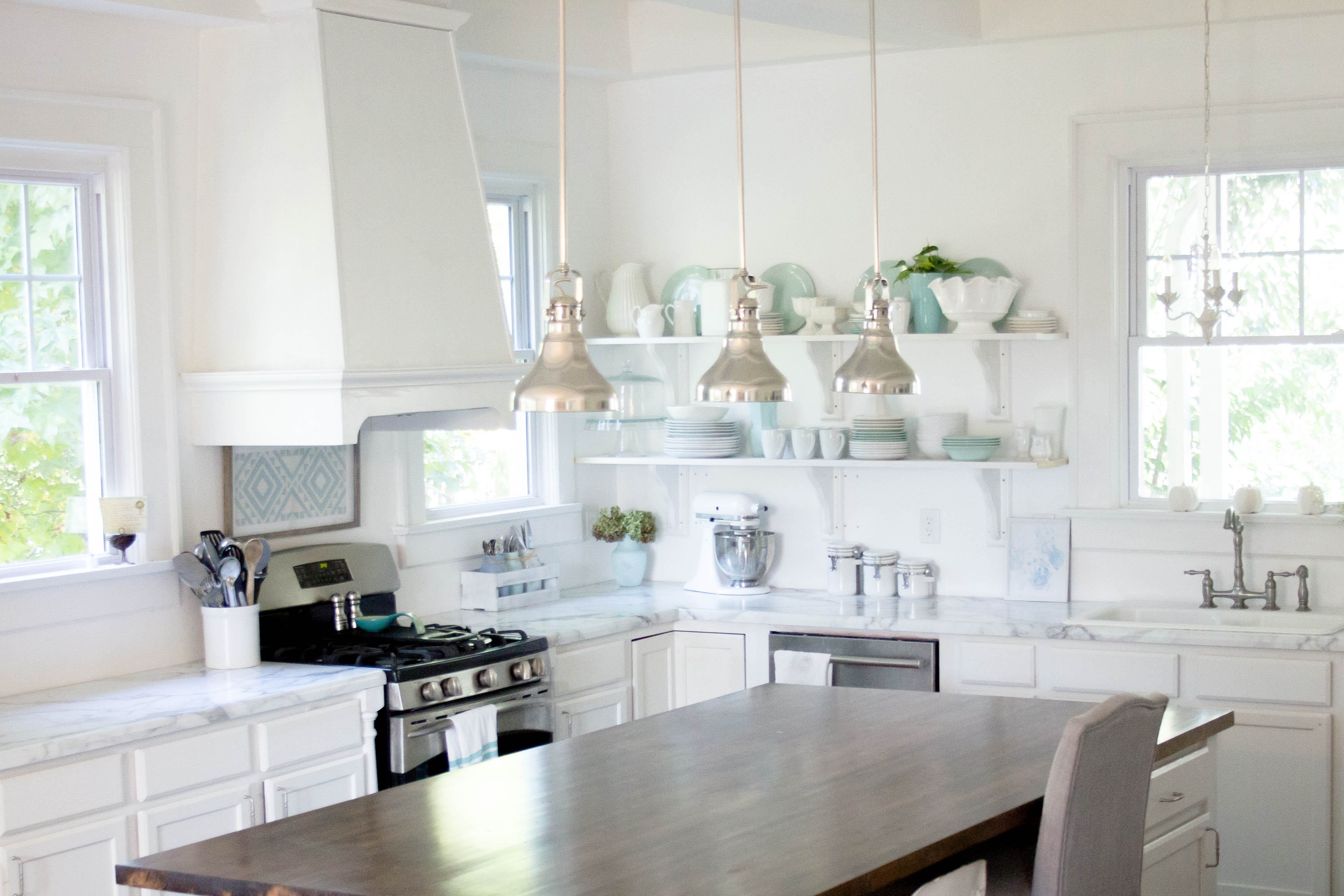 To read the entire kitchen story, you can catch up here:  Part I,  Part II, Part III, Part IV, and The Reveal 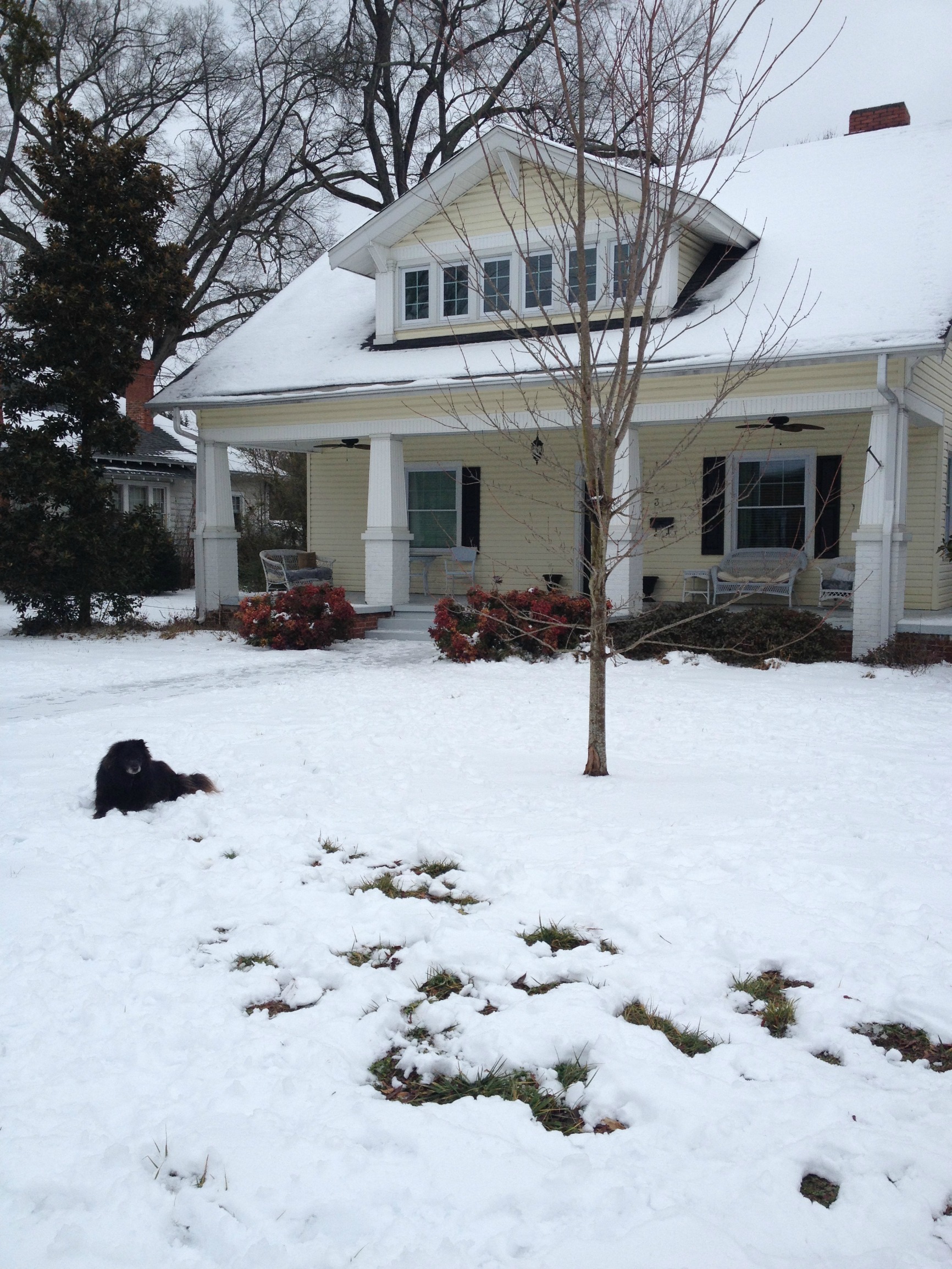 16 comments on “The Yellow House”